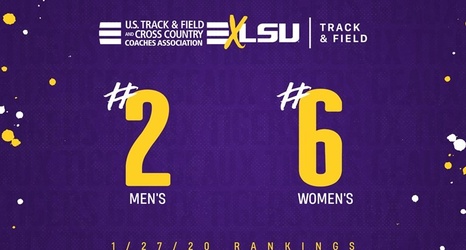 Baton Rouge, LA. – The U.S.Track & Field & Cross Country Coaches Association rankings were released Monday afternoon and the men's team remained in the No. 2 spot, while the women's squad moved up ten spots to become the sixth ranked team in the nation. LSU is one of five schools in the country to have both the men's and women's team be ranked in the top ten.

The second nationally ranked men's team has lived up to their preseason ranking of number two as they impressed in their first three competitions of the season. Senior standout Rayvon Grey set the NCAA season best distance in the long jump in his season debut at the Purple Tiger Invitational.