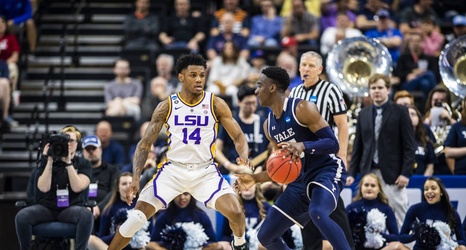 JACKSONVILLE, Fla. – It was different, and it wasn’t, the challenge that lay before Marlon Taylor on Thursday in Round 1 of the 2019 NCAA Tournament.

On one hand, his matchup for the day, Yale wing Miye Oni, is one of a kind, a former DIII recruit who landed at Yale after a year of prep school and transformed from an unheralded prospect to a future pro. Oni, the Ivy League Player of the Year, could very well hear his name called in the first round of June’s NBA Draft.

On the other, Taylor, a 6-foot-6 wing with other-worldly hops – seriously, he might be able to planet hop off of two feet – has drawn tough defensive assignments all year for the Tigers.