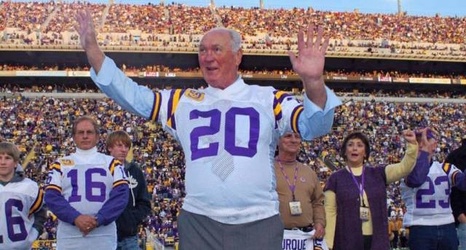 BATON ROUGE – LSU’s 1959 Heisman Trophy winner Billy Cannon and former running back Joseph Addai are set to join ESPN’s Neil Everett on the LSU Parade Grounds on Saturday afternoon for the latest stop on the Nissan Heisman House Tour before the 13th-ranked Tigers take on No. 1 Alabama in Tiger Stadium at 7 p.m. CT.

Cannon, whose Halloween Night punt return against Ole Miss during his Heisman Trophy-winning season ranks among the most defining moments in college football history, is set to appear with Everett in a Chalk Talk session from 2:30-3 p.m. followed by an autograph session from 3-4 p.