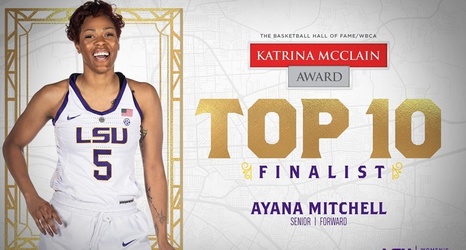 BATON ROUGE, La. – LSU forward Ayana Mitchell has been named a Top 10 finalist for the 2020 Katrina McClain Award as announced by the Naismith Memorial Basketball Hall of Fame and the Women's Basketball Coaches Association today.

Mitchell is one of 10 finalists for the award that was named after McClain, a two-time All-American and 1987 National Player of the Year. The annual award in its third year recognizes the top power forwards in women's NCAA Division I college basketball.

The Conyers, Georgia, native saw her collegiate career end with a knee injury suffered on February 2, but has made a significant impact on the LSU program during her time in the Purple & Gold.