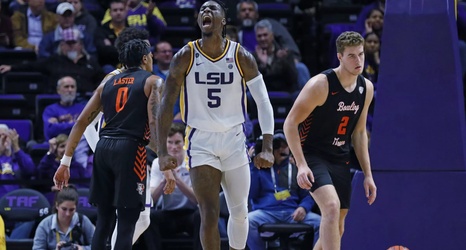 The last time the LSU men’s basketball team was in the Pete Maravich Assembly Center, the Tigers were cutting down nets after winning the program’s first Southeastern Conference title in 10 teams — but they were doing so without coach Will Wade, who was serving a suspension for not cooperating with LSU’s investigation of his involvement in the FBI’s probe into college basketball.

Friday night, Wade and the Tigers returned to the PMAC like they never left for an 88-79 season-opening victory over Bowling Green.

Five Tigers were in double-digits in the win — sophomore forward Emmitt Williams put up a career-high 21 points and fellow sophomore point guard Javonte Smart looked to make a huge jump over the offseason with 21 points of his own.