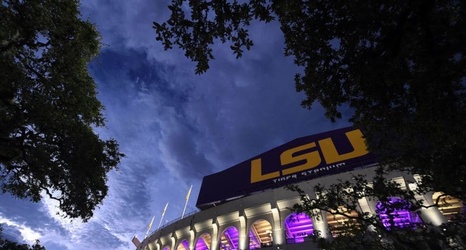 LSU football is trying to land a four-star 2022 offensive lineman.

LSU football, along with numerous other programs, is hoping they can land a commitment from 2022 four-star offensive lineman Tyler Booker.

Booker, 6-foot-4/290 lbs from Bradenton, FL (IMG Academy), is rated by 247Sports as the No. 4 offensive tackle in the nation and the No. 3 player in the state of Florida. He’s also rated as the No. 28 overall 2022 recruit in the nation (which means he’s a borderline five-star recruit).

The massive offensive lineman recently discussed his recruitment with Rivals and pointed out five schools that are standing out for him — Penn State, Florida, Florida State, LSU, and Georgia.