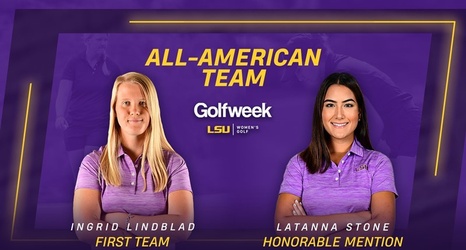 BATON ROUGE — LSU freshmen Ingrid Lindblad and Latanna Stone were named to the 2020 Golfweek All-America Team on Monday. Lindblad, a finalist for the ANNIKA Award, was named to the First Team, while Stone received Honorable Mention. It is Lindblad's second All-America honor, adding to her WGCA All-America accolade.

Lindblad posted the lowest single-season average in LSU history with a 70.33. She finished the season ranked No. 2 by Golfweek and No. 9 by Golfstat. The Halmstad, Sweden native is a finalist for the 2020 ANNIKA Award presented by Stifel given annually to the top female collegiate golfer.