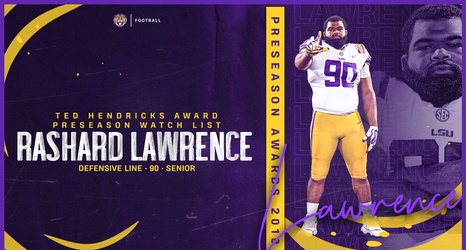 The Ted Hendricks Award has been presented annually since 2002 to the top defensive end in college football.

Lawrence, a senior from Neville High School in Monroe, enters his third season as a starter on the defensive line for the Tigers. Lawrence is coming off his best season as a Tiger, racking up 54 tackles, 10.5 tackles for loss and 4.0 sacks.

He capped his junior season in 2018 by earning defensive player of the game honors in LSU’s win over UCF in the Fiesta Bowl.