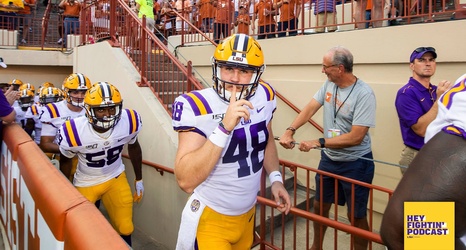 Senior longsnapper Blake Ferguson joins today's show for a wide-ranging conversation that starts with LSU's win over Texas and ends with Chelsea-Arsenal banter.

In between, we get into some fascinating stuff: Blake's craftsmanlike approach to his trade, how he and his brother got into the longsnapping game, how his parents have been at every LSU game since 2012, and the inner workings of the special teams room. He talks about Cade York's poise, Zach Von Rosenberg's work ethic, and which special teamers came to football from soccer backgrounds.

After that, special teams coordinator Greg McMahon jumps on to break down York's recruitment and early success, Ferguson's leadership, Avery Atkins' consistency, and the culture of special teams at LSU as a launchpoint for young stars in the making.