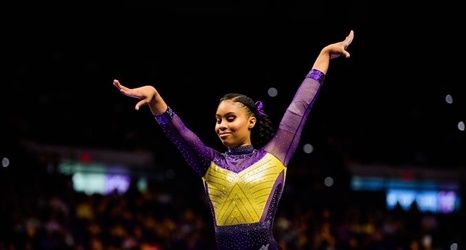 COLUMBIA, Mo. – The sixth-ranked LSU gymnastics team concluded its road swing with a team score of 197.025 and road victory over No. 18 Missouri Friday night at Hearnes Center.

The Fighting Tigers improved to 10-2 and 4-2 against SEC opponents.

"They showed so much character and so much grit tonight," D-D Breaux said. "With their backs against the wall to end it they did some really good beam. We had some mistakes tonight but fought and scratched for every score. I thought our performance was a little bit better than the score indicated. Missouri had the momentum and we sucked it out of the arena to get the win.