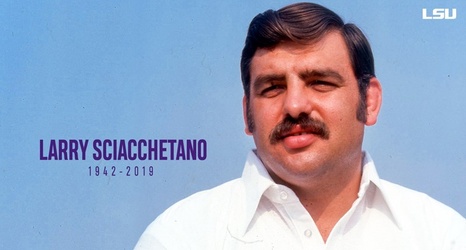 BATON ROUGE – Former LSU and international wrestling coach and administrator Larry Sciacchetano, who this past Friday helped induct the first wrestler into the LSU Athletics Hall of Fame, passed away Tuesday at the age of 77.

Born in Jersey City, New Jersey, in 1942, Sciacchetano coached from 1976-85, leading the Tigers to seven Southeastern Conference titles and two eighth-place finishes at the NCAA Tournament.

In a 1978 Sports Illustrated article about northern coaches coming to the SEC to coach wrestling, "Shack" as he was known was described as "six feet, 230 pounds and wears a mustache as big as a broom.