Etherington Tabbed as Director of Ops for Soccer 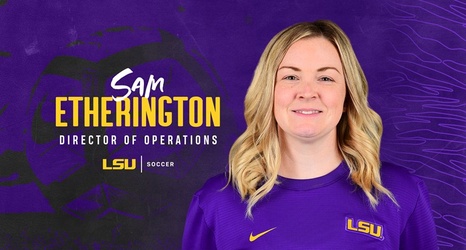 Etherington, a native of Newcastle, England, has strong Louisiana ties as she played collegiately at Nicholls State (2008-11) and was the head coach at Louisiana College from 2015 to 2020. Etherington will handle a number of day-to-day tasks for LSU soccer that includes but is not limited to travel arrangements, ordering/distribution of equipment and gear, gameday responsibilities, budget management and more.

Etherington has a deep knowledge of the game of soccer and has experienced it at all levels – she's played Division I, she's ran a Division III program, and has served as a coach in the Louisiana Olympic Development program.