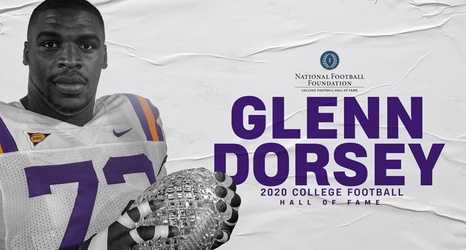 BATON ROUGE – Glenn Dorsey, the most decorated defensive player in LSU history, has been named to the 2020 College Football Hall of Fame Class, the National Football Foundation announced on Wednesday.

Dorsey, who starred on LSU's 2007 national championship team, will officially be inducted into the College Football Hall of Fame on December 8, 2020 at the NFF Annual Awards Dinner in New York City.

Dorsey is joined in the 2020 Class by 16 other players along with two coaches – Dick Sheridan and Andy Talley.

"This means the world to me," Dorsey said on Wednesday morning.