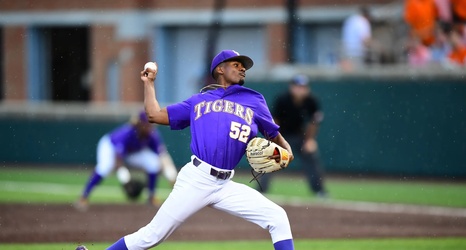 LSU lost game one of the Knoxville Super Regional to Tennessee 4-2 Saturday night. There were two key contributing factors to LSU falling on the brink of elimination (again), and both happened in the sixth inning.

The first was Cade Doughty misplaying what should have been a pretty cut and dry groundout. With runners on second and third with one out, Doughty fielded a chopper at third. He looked to see if there was a play at home, and then out the corner of his eye he saw the runner breaking for third behind him. He turned to try and apply the tag, but the runner was too far away and by the time he completed the 360 and made a throw to first, it was far too late.