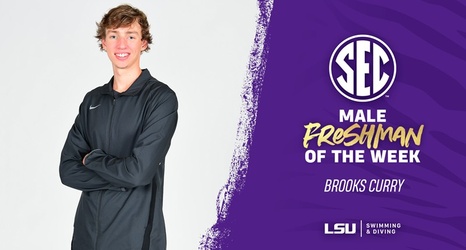 BATON ROUGE - LSU swimmer Brooks Curry has been named SEC Male Freshman of the Week, announced by the conference office on Tuesday.

This is the first time this season that Curry has been named Freshman of the Week by the SEC and it comes after a dominating three-day stretch that featured three individual wins and two relay wins. On Thursday, January 9 against No. 7 Missouri, Curry won both the 100 and 200-Yard Free with times of 43.96 and 1:36.93. It was the second time that the Atlanta native won both freestyle events as he did so at the SMU Invitational in November.