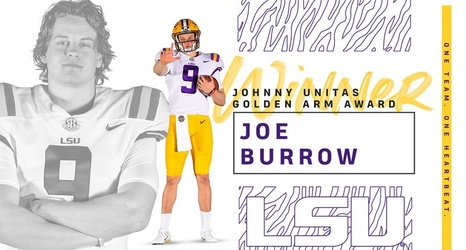 The Johnny Unitas Golden Arm Award is presented annually to the nation's top quarterback that best exemplifies character, scholastic and athletic achievement. Burrow is the first LSU Tiger to win this prestigious award.

On the field, Burrow has set nearly every LSU single-season passing record in leading the Tigers to a 12-0 overall mark and a No. 1 national ranking. Burrow and the Tigers will face fourth-ranked Georgia on Saturday in the SEC Championship Game in Atlanta.