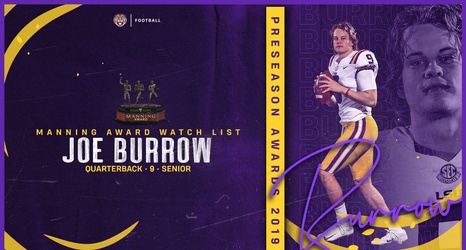 BATON ROUGE – LSU’s Joe Burrow had his name added to another preseason list for a national award as the senior quarterback is one of 30 candidates on the watch list for the Manning Award, the Allstate Sugar Bowl announced on Wednesday.

The Manning Award was created by the Allstate Sugar Bowl in honor of the college football accomplishments of Archie, Peyton and Eli Manning. It is the only quarterback award that includes the candidates’ bowl performances in its balloting.

Burrow, a senior from The Plains, Ohio, enters his second season as LSU’s starting quarterback after leading the Tigers to a 10-3 mark a year ago.