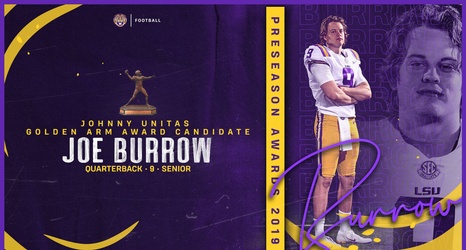 BATON ROUGE – LSU’s Joe Burrow picked up another preseason accolade as he’s been selected as a candidate for the 2019 Johnny Unitas Golden Arm Award, the organization announced on Monday.

Burrow has previously been named as preseason candidate for the Davey O’Brien Award as well as the Maxwell Award.

The Johnny Unitas Golden Arm Award is presented annually to the top senior or fourth-year junior quarterback in college football.

Burrow, a senior from The Plains, Ohio, enters his second season as LSU’s starting quarterback after leading the Tigers to a 10-3 mark a year ago.