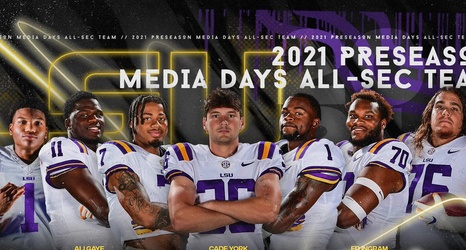 The talented LSU roster was well represented among the All-SEC selections.

Derek Stingley and Cade York headline the group with their well-deserved first team nod. The second team (which, given some sketchy selections, is basically as good as the first team), is riddled with LSU talent with Ed Ingram, Austin Deculus, Eli Ricks, Kayshon Boutte, and Ali Gaye representing the Purple and Gold.

I understand that it makes me an idiot to get annoyed about preseason All-whatever team selections, but the non-obvious ones were often very silly. Eli Ricks should ABSOLUTELY be on the first team, PFF is wise enough to have him as the No.