Ranking The 5 Toughest Games On LSU Football's Schedule In 2018 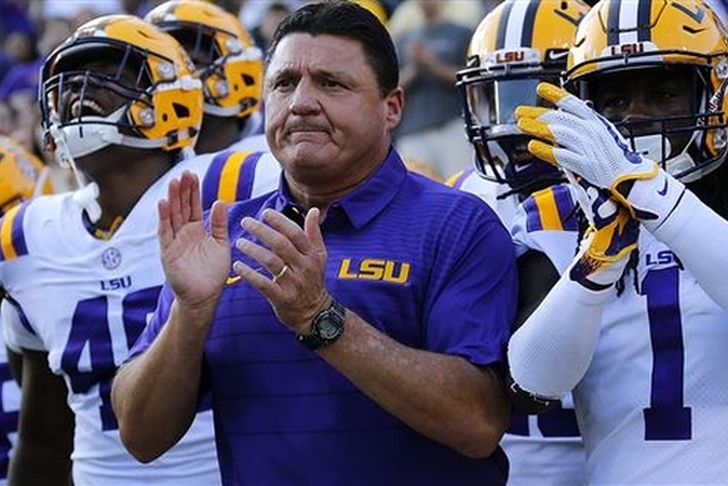 College football is unique in that a single loss could mean the difference between a conference championship appearance (or the ultimate regular-season goal, a College Football Playoff spot) and ending up in an average bowl game. The LSU Tigers have been on the wrong end too much lately, but this team expects to be in the CFP mix this season.

If the Tigers want to reach their goal of winning the SEC and competing for a College Football Playoff, they need to win some of the most challenging games on their 2018 schedule. Those games won't be easy, but they are of vital importance to LSU's playoff hopes. With that in mind, here are LSU's five toughest games in 2018.

5) at Florida Gators - Oct. 6th
Florida might not be as good as they have been but a road trip to Gainesville won't be easy. There's still some bad blood between these teams and, if LSU's offense can find success against the Gators, the LSU defense should shut down an iffy Florida offense.

4) vs. Miami Hurricanes (Arlington, TX) - Sept. 2nd
Two top 10 teams squaring off on a neutral field with the winner putting themselves in an early position to compete for a College Football Playoff berth. That's what these season-opening, high-stakes non-conference games are about, right?

3) at Auburn Tigers - Sept. 15th
Among the early SEC matchups, there's a chance this is a College Football Playoff elimination game. At the very least, it looks like a SEC West elimination game. Auburn has talent and, if QB Jarrett Stidham can be as good as he can be, Auburn will be a serious CFP threat again. Though the Tigers upset Auburn last year, this will be a very tough test on the road.

2) vs. Georgia Bulldogs - Oct. 13th
Talk about a marquee game. The defending SEC champs came within a few seconds of upsetting Alabama and winning the national championship, and return many of their key pieces from that team. While this game is in Baton Rouge, Georgia has the talent to test LSU at every position. The Tigers will need to find quality quarterback play to win this game.

1) vs. Alabama Crimson Tide - Nov. 3rd
Alabama and LSU is one of the best rivalries in the sport and Death Valley is one of the toughest places to play. The Tide have won seven games in a row in the series but the last three games in Baton Rouge have all been decided by 10 points or less. Expect this to be another extremely tough game.