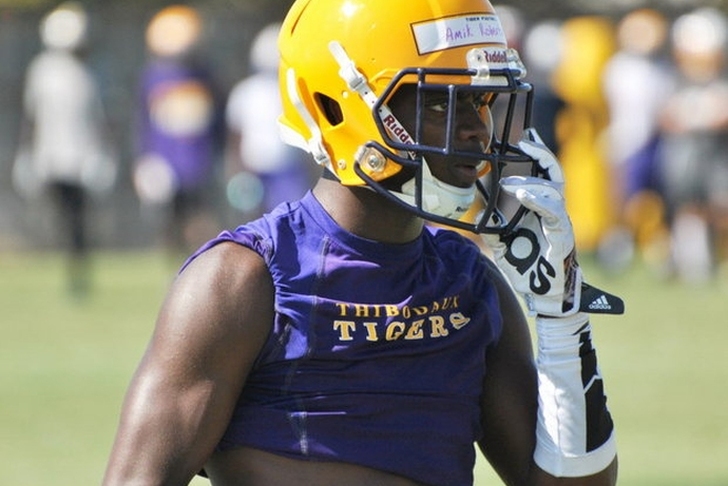 The LSU Tigers haven't offered three-star cornerback Amik Robertson (Thibodaux, LA) yet, but that may be changing soon. Robertson is currently recovering from a torn ACL, which is the reason an offer hasn't come yet.

"I was injured at practice but didn’t realize it,” Robertson said, via 247sports. "I kind of thought it was a sprain. It turns out I played with a torn ACL for three games and some 7-on-7 stuff. I just didn’t realize it. I thought it was nothing. When I met with my doctor, he said it had been torn for a couple months. I don’t know how I did it, but I pushed through."

“Coach Orgeron called me up and said he wanted me at the Bayou Picnic,” he said. “I didn’t even know it was an invite-only thing, I just figured he was calling to tell everyone to come. So when he told me it was only a small number of guys they were inviting, it felt awesome. To know LSU is recruiting me even during my recovery, that’s a great feeling. That kind of motivated me even more. I feel good about it."

Orgeron also told Robertson that they will continue to scout him once he recovers, and if they like what they see, an offer could be coming.

"I talked with a bunch of the coaches [at the picnic], but I had a long talk with Coach Orgeron,” Robertson said. "He’s pulling for me to get my knee right. He said that if I’m not fully-healthy by that camp on July 23, then he will be at my games in the fall. He let me know not to worry about the evaluation process and all that and just focus on getting healthy.

“I know there are a lot of people pulling for me, and I feel that support. I’m just going to stay focused and get healthy and go from there. I’m going to show people that there is no falloff from where I was at last year."