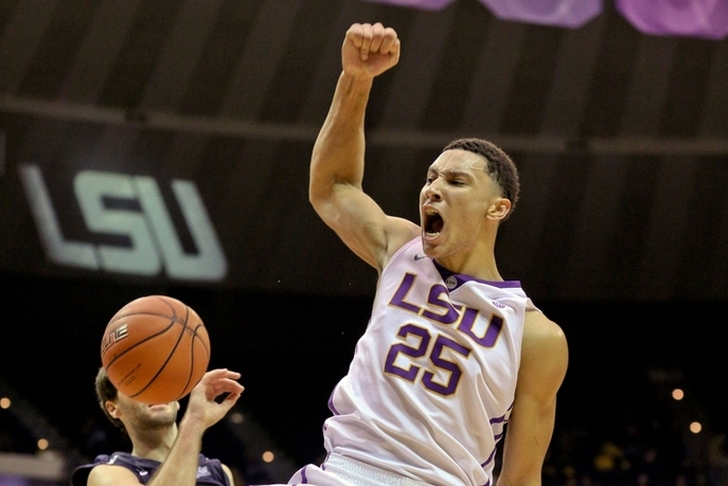 LSU Tigers forward Ben Simmons is widely thought of as the best prospect in the 2016 NBA Draft, and a few teams in the league purposefully tanked the season in order to have a better chance to draft him. Though he is expected to go No. 1 overall, there's a chance he could fall to No. 2 or No. 3 because of his inability to shoot. Here are the three teams that are the most likely to draft him:

Philadelphia 76ers
The Sixers finished with the worst record in the NBA, giving them the best chance to land the top pick and the opportunity to draft Simmons. It may seem like a slam dunk for a team in desperate need a superstar, but they already have a logjam of big men. That could cause Philly to go with Duke's Brandon Ingram over Simmons.

Los Angeles Lakers
LA is projected to have the No. 2 pick in the draft, and they're Simmons' most likely destination. If the Lakers get the No. 1 pick in the lottery, they won't hesitate to draft Simmons. If they stay at No. 2, they'll be praying the Sixers take Ingram. His ability to score on the block would be the perfect focal point on head coach Byron Scott's offense, and the Lakers have the shooters to capitalize on his outstanding passing ability.

Boston Celtics
Boston holds the Brooklyn Nets' first-round pick that has the third-best lottery odds, giving them an outside chance at landing Simmons. The Celtics are a superstar away from being a legitimate title contender, and Simmons is projected to be that guy in the future. His passing ability is an absolute perfect fit for Celtics head coach Brad Stevens' offense, along with finally giving the C's a low-post threat.