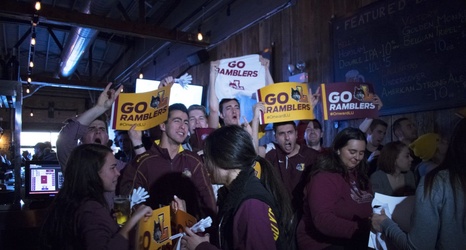 As the Loyola men’s basketball team won yet another game by just one point to advance to the Elite Eight in the NCAA tournament, loyal Rambler fans were glued to televisions around the world to watch the Ramblers take on — and defeat — the Nevada Wolf Pack 69-68.

In Rogers Park, Bulldog Ale House and Damen Student Center hosted watch parties for students, alumni, Rogers Park residents and other fans. Both venues were packed wall-to-wall with fans and the energy around campus was electric, some fans said.

In Ireland’s Pub 10, the on-campus pub named for 1963 men’s basketball coach George Ireland, it was standing room only.