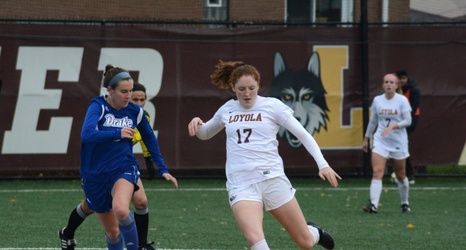 With 11 days since the last game of its regular season, the Loyola women’s soccer team won 2-1 over Illinois State University in the semifinals of the Missouri Valley Conference (MVC) Tournament April 14. The victory at Loyola Soccer Park sends the Ramblers ahead to fight for their third consecutive MVC championship April 17.

Loyola came into the tournament as the No. 1 seed after securing its third consecutive regular season title. The Ramblers also had 11 days between their last game — a loss to University of Evansville on Senior Night April 5 — whereas the No.