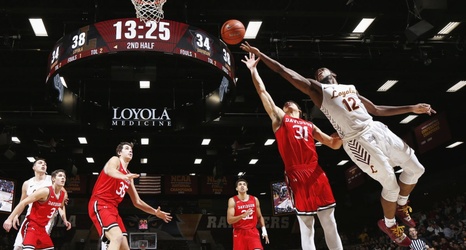 In its last non-conference game of the season, the Loyola men’s basketball team (8-5) took Davidson University down to the wire before ultimately falling to the Wildcats at Gentile Arena Sunday afternoon.

Davidson came out on top 59-56 after Loyola redshirt junior guard Tate Hall missed a potential game-tying three-pointer with four seconds remaining in the contest. Loyola, which had won five straight games, led 25-23 at halftime and had a 42-34 lead with 12:37 left in the second half. But Davidson heated up and tied the game 42-42 with 8:56 remaining.

Both teams traded shots, but Davidson senior guard Jon Axel Gundmundsson’s three-pointer with 2:10 to play put the Wildcats on top for good.