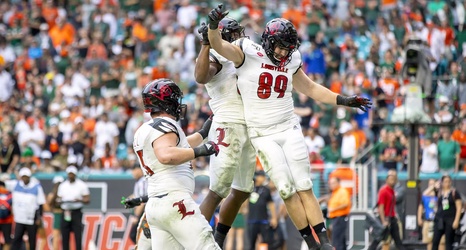 Louisville Football continued their solid streak in recruiting today when Tight End Victor Mullen committed to the Cards. Mullen is one of the many recruits that made multiple visits to Louisville’s campus and the Cards were his first power five offer. Iowa State and Syracuse jumped in shortly after but the visits and connection with the staff seem to be the thing that sealed the deal for Louisville. He is listed as a three star prospect on 247 and Rivals, but it appears that Rivals has two pages for him so that might be the reason that he doesn’t have a composite rating as of now.