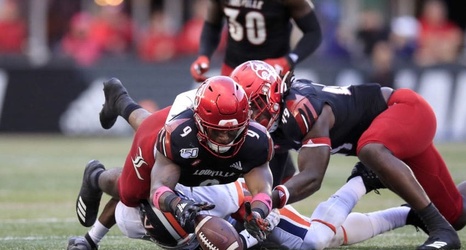 LOUISVILLE, KENTUCKY - OCTOBER 26: C.J. Avery #9 of the Louisville Cardinals reaches to recover a fumble by Joe Reed #2 of the Virginia Cavaliers on October 26, 2019 in Louisville, Kentucky. (Photo by Andy Lyons/Getty Images)

The depth in the trenches continues to grow for Louisville football. This time, it’s in the form of 2021 defensive lineman Ashton Gillotte.

It has been known that the Cardinals coaching staff is dead set on fortifying the talent and depth along the offensive and defensive lines, and that has been apparent by the type of players to come off the board early in this class.