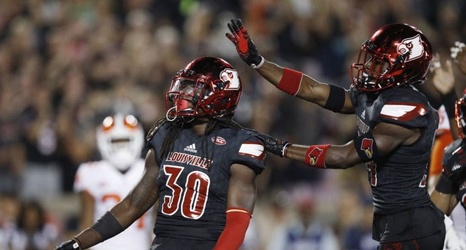 LOUISVILLE, KY - SEPTEMBER 16: Khane Pass #30 of the Louisville Cardinals celebrates with Zykiesis Cannon #24 after a tackle for loss against the Clemson Tigers in the first quarter of a game at Papa John's Cardinal Stadium on September 16, 2017 in Louisville, Kentucky. (Photo by Joe Robbins/Getty Images)

Louisville football remained hot on the recruiting trail on Sunday when it landed a high three star class of 2021 safety.

The Louisville football coaching staff has been closing in on a number of top tier players in the class of 2021, and the Cards may have landed their biggest name yet.