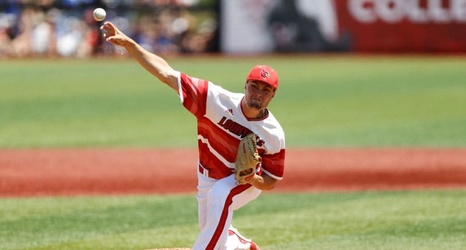 LOUISVILLE, KY - JUNE 09: Kade McClure of the Louisville Cardinals delivers a pitch against the Kentucky Wildcats during the 2017 NCAA Division I Men's Baseball Super Regional at Jim Patterson Stadium on June 9, 2017 in Louisville, Kentucky. (Photo by Michael Reaves/Getty Images)

Louisville football could have a chance to land a true two-sport prospect in 2021 football and baseball recruit Bubba Chandler.

The recruitment of new Louisville football prospect Bubba Chandler is an odd one, but a story that Cardinals fans should be following very closely.

A two-sport athlete out of Bogart, Georgia, the 6’4,” 195-pound Chandler committed to play baseball at Georgia back in June of 2019.