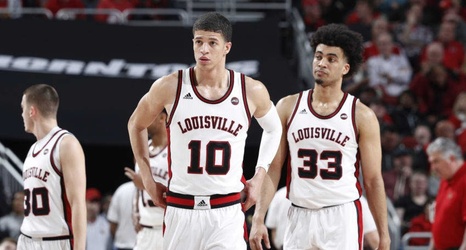 LOUISVILLE, KY - JANUARY 25: Samuell Williamson #10 and Jordan Nwora #33 of the Louisville Cardinals look on during a game against the Clemson Tigers at KFC YUM! Center on January 25, 2020 in Louisville, Kentucky. Louisville defeated Clemson 80-62. (Photo by Joe Robbins/Getty Images)

Allen would be instant impact player for Louisville basketball.

It’s been a rather slow stretch on the recruiting trail for Louisville basketball and head coach Chris Mack.

After a 2020 recruiting cycle that saw multiple top-name recruits appear close to signing with the Cards before cooling and then committing elsewhere, the Cards wound up without any players who project to make a difference right away.