Clemson rolls to 45-10 win over Louisville 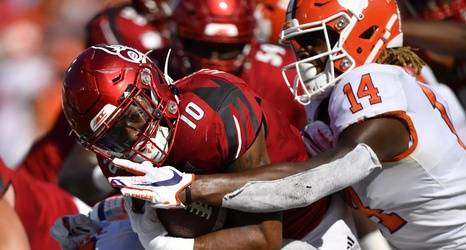 Trevor Lawrence threw two early interceptions to the Cardinals, but rebounded to throw for three touchdowns as #3 Clemson (7-0) rolled to a 45-10 win over Louisville (4-3). The win pushes Clemson's winning streak to 22 games, the longest active streak in the FBS.

It was a game that saw Clemson slowly work its way to a dominant victory, behind a strong defensive effort. Louisville's first drive ended in an interception, as starter Micale Cunningham threw a deep ball that went through Tutu Atwell's hands and into K'Von Wallace's.