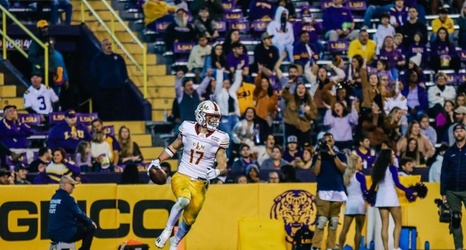 BATON ROUGE, La. – The Warhawks entered Tiger Stadium to face off against the LSU Tigers with the potential of a bowl appearance on the line. The Warhawks were calling Baton Rouge for the chance to upset the Tigers, but LSU sent that call straight to voicemail.

ULM failed on fourth down twice within the LSU 5-yard line. If the Warhawks were able to turn these mishaps into scores, this would have been a different ball game than the 27-14 final score.

Running back Malik Jackson caught a pass on fourth-and-1 but fell down short of the end zone which gave LSU the ball.

See full article at The Hawkeye