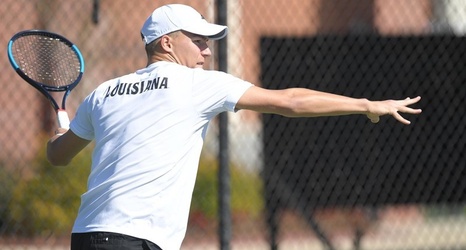 LAFAYETTE - Louisiana Men's Tennis will conclude its regular season at Loyola New Orleans on Saturday. The Ragin' Cajuns and Loyala will play a doubleheader, with start times scheduled for Noon and 2:30 p.m.

Loyola enters the match at 2-6, posting an 0-5 record in its conference.

Louisiana is highlighted by the doubles pair of Ivailo Keremedchiev and Kcaper Dworak. The two are rated as the No. 33 doubles tandem in the country, which is the fifth-best doubles pairing by a non-Power 5 team.