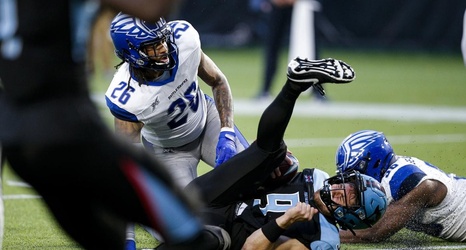 The St. Louis BattleHawks went into Sunday’s XFL opener in Dallas as 9 ½-point underdogs. And they came away with a well-earned 15-9 victory over the Renegades.

But head coach and general manager Jonathan Hayes is not completely satisfied. At least not yet.

“Obviously, we still have plenty of things to clean up — the false starts, we can’t put the ball on the ground, the snap over the quarterback’s head — those are things we can improve on,” Hayes said earlier this week while meeting the media in Earth City. “But overall, I thought our guys went out and they played well.