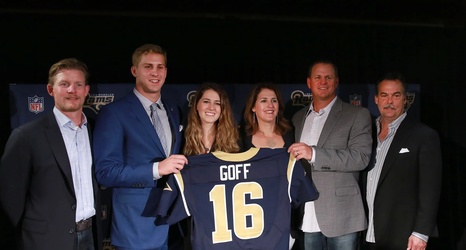 It was April 14, 2016, a few days over five years ago, that the St. Louis Rams traded up from pick 15 to pick one so that they could have their choice of franchise quarterback between Cal’s Jared Goff and North Dakota State’s Carson Wentz. The parallel natures of their careers aside — teams traded up for them, they helped their teams reach a Super Bowl, they signed massive contract extensions, they got traded to new teams this year — Goff and Wentz are the headline that will always define the 2016 NFL Draft.

That and the “gas mask incident,” a moment that sure doesn’t seem like such a big deal with five years of hindsight.