Rams vs. Cardinals: 3 Things We Learned From Each Team 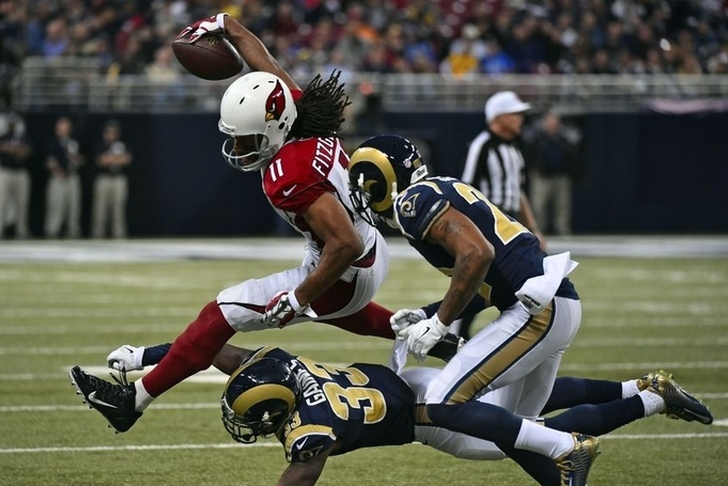 The St. Louis Rams improved to 2-2 by upsetting the previously-undefeated Arizona Cardinals, who fall to 3-1. Nick Foles threw 3 TD passes to guide the Rams to the win, while the Cardinals committed three turnovers. Here are 3 things we learned about each time from the Rams' win.

The Rams play their best against their best competition. The Rams' two wins have come against the Seattle Seahawks and the Arizona Cardinals, two teams widely considered among the best in the NFC. The Rams fought hard against the Pittsburgh Steelers too. The loss against the Washington Redskins still hurts, but the Rams look like the kind of team that up their level of play if the competition is stronger.

Todd Gurley is going to be really good. Perhaps we already suspected this, but this was the first game Gurley had a regular workload. Gurley had 19 carries for an impressive 146 yards. The Rams' offensive line is still a work in progress, but Gurley has the potential to be a great NFL back. Of course, that's if he stays healthy.

Good things happen when Tavon Austin touches the ball. Austin hasn't produced much in his NFL career, but that's because the Rams didn't find ways to get the ball into his hands. That wasn't the case against the Cardinals. Austin had eight touches in the game for 116 yards and two scores. He should probably get a few more each game and the Rams must make sure he gets touches every game.

Balance is important. Carson Palmer has played well, but the Cardinals need to run the ball more than 21 times if they plan on throwing it 46. A one-dimensional offense is not going to have success against better teams. The Cardinals averaged over 5 yards per carry, so it's not like the running game wasn't having success.

Turnovers kill. We probably already knew this, but committing three turnovers and failing to force any is not the recipe for success. The Cardinals outgained the Rams by more than 100 yards and had twice as many first downs, but turnovers were their downfall.

The Cardinals are still among the best teams in the NFC ... I think. Ok, so I'm totally cheating with this one, but look at the Cardinals' opponents. The 49ers, Bears and Saints are all among the NFL's worst. The Rams were Arizona's first real challenge and the Cardinals failed. I think the Cardinals are a playoff team, but I do wonder just how good they are. Back-to-back road games against the Lions and Steelers could give us a better indication.