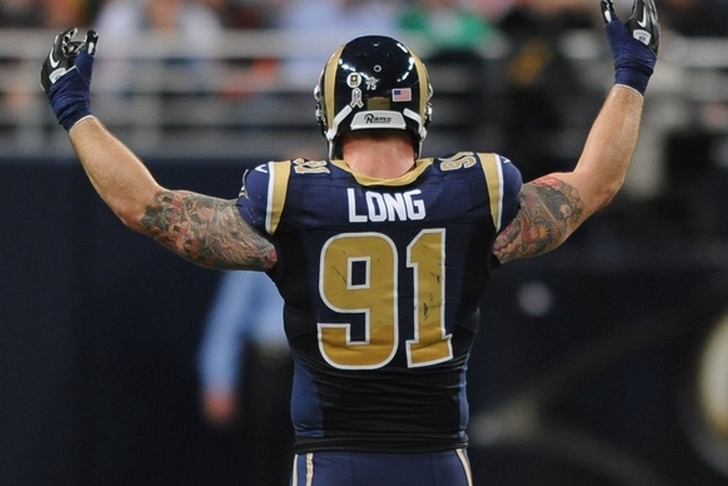 The Los Angeles Rams announced three cuts Friday afternoon. DE Chris Long, LB James Laurinaitis and TE Jared Cook were all starters in the past for the Rams, but were released today.

"This is the time of year when all NFL teams are faced with difficult decisions regarding their veteran players," Rams head coach Jeff Fisher said in a statement. "Chris and James are the epitome of what it means to be a pro in this league and it’s been an honor to coach them both. They’ve been the pillars of our defense for many years and not enough can be said of their love for the game and for their teammates. Beyond the field, they took pride in mentoring the younger players and doing their part to make a real difference in the St. Louis community. We will always be grateful for James and Chris’ unselfish commitment to the Rams and wish them the best moving forward.

Fisher had similar comments for Cook, who the team signed in the 2013 offseason.

"Jared made an immediate impact when he joined the team in 2013," Fisher said. "It’s been a pleasure watching him grow from the time I drafted him in Tennessee to seeing him set franchise records in St. Louis. Like Chris and James, he’s been a mainstay in the community and his contributions are commendable. We hope for the best for Jared and his family as he embarks on the next steps of his career."

The decision to cut all three players was heavily motivated by the money involved. Cutting Cook and Laurinaitis saves the team nearly $6 million apiece. The release of Long saves $12 million.

Laurinaitis and Cook were both starters this season, while Long battled injuries and started just five games this season. Laurinaitis' level of play had dropped in recent years and Cook had not lived up to the expectations the team had for him when they signed from the Titans. Laurinaitis is the team's all-time leader in tackles.

Long had played in all 16 games in the first six years of his career, but was limited to just 18 combined the last two years because of injuries. He had four sacks in the last two seasons. At just 30 years old, Long should find a new team this offseason.