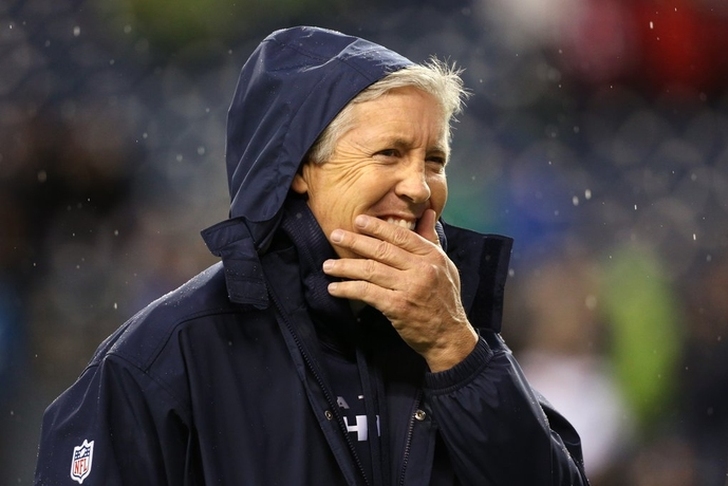 The Los Angeles Rams canned head coach Jeff Fisher Monday and are now in the process of looking for a new head coach. It appears they're aiming big in this coaching search, because Yahoo! Sports reports they want to lure Pete Carroll away from the Seattle Seahawks.

Multiple sources with insight into the earliest stages of the Rams coaching search said there is a monster name that intrigues the power brokers inside the franchise: the Seattle Seahawks’ Pete Carroll.

Robinson even has a source who lays out why it makes "sense" for Carroll to head to Los Angeles.

"Pete makes sense in a lot of ways,” one source said. “There is already a defensive core in place for him to work with. He has deep coaching ties across [the NFL] and knows how to build an offensive staff that can bring along [Goff]. … He’s a California guy at heart and has a track record there with the L.A. fan base [from his time at USC]. He’s also a great, great coach.”

First and foremost, all of the sources familiar with the Rams’ thinking labeled Carroll as a “want” or “wish” candidate. In other words, there’s no indication that Carroll would be interested in leaving Seattle for Los Angeles, although multiple NFL sources believe Carroll has a desire to eventually retire to California.

There are some major issues in landing Carroll. We'll start with the contract that he just signed that keeps him in Seattle through the 2019 season. Plus, why would Carroll leave a really good situation in Seattle for Los Angeles? He might be a California guy, but this is a mess of an organization that revealed an extension for their previous head coach, only to fire him 10 days later and on a short week. The Rams' actions aren't making a lot of sense right now and neither is pining after Carroll.

Between the interest in Carroll and the rumors of Jim Harbaugh leaving Michigan and heading to Los Angeles (that's also not happening), the Rams are targeting some notable coaches. Of course, they likely won't get either of those two. Maybe the Rams are just being optimistic, but delusional might be more accurate. What's next, they'll try to poach Bill Belichick?