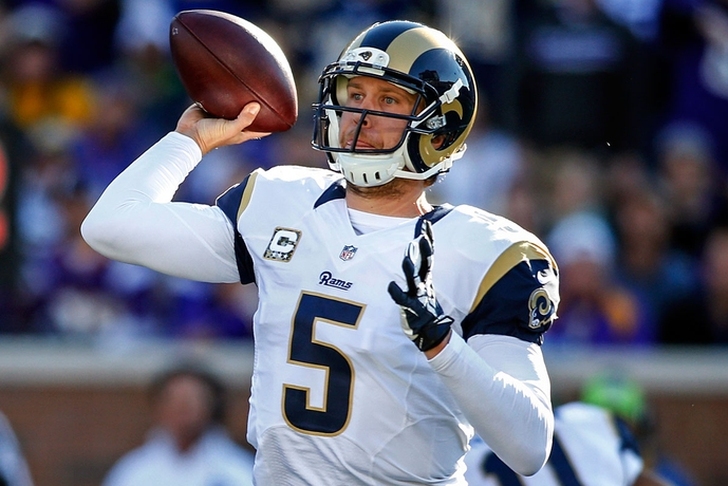 NFL Free Agency is officially here, and the next few days will feature several Los Angeles Rams rumors. The Rams have already made several big moves and might not be done yet. With that in mind, here are a few of the more interesting rumors and news tidbits on the Rams.

Los Angeles undecided on Nick Foles' future
NFL Network's Ian Rapoport reported last week that several teams were interested in potentially trading for Foles, but the team didn't know if that was in their best interest.

Though LA is holding onto Foles for now, that doesn't mean they will. The Rams are likely holding onto him as a backup option in case they are unable to sign one of the quarterbacks available on the open market. They have been linked to Robert Griffin III, Colin Kaepernick, and Ryan Fitzpatrick, and if they are able to acquire one of them, then you'll see them actively trying to unload Foles.

Patriots interested in Rams duo
The Patriots' search for depth along their defensive line has led them to former Rams defensive end Chris Long, according to Mark Daniels of the Providence Journal:

The Providence Journal has learned that the Patriots are showing interest in the eight-year veteran, who is the son of Hall of Famer Howie Long and a former No. 2 overall draft pick. The 30-year-old Long made three sacks last season in St. Louis, where he’s spent his entire career.

Long had a great run from 2010 to 2013, making 41.5 sacks during that period. Long has also drawn interest from Dallas, Washington and Atlanta. Talking with SiriusXM NFL Radio,

Long said he already visited Atlanta and Washington and has a few more visits lined up. This veteran is in no rush to make a move.

"I want to go to a team that's going to be in the playoffs," Long said. "It's all about football and winning for me."

Another name that has come up on New England's radar is former Rams linebacker James Laurinaitis, and he took a visit to the Patriots, according to multiple reports. The Pats are looking for a third linebacker after Jerod Mayo announced his retirement, and Laurinaitis certainly fits that mold. He had 109 tackles, one interception, and one forced fumble last season.

RGIII Wants To Play For Rams?
Robert Griffin was recently cut by the Redskins and he's now looking for his next NFL home. According to the Los Angeles Daily News, RGIII "very much" wants to play for the Rams. The Rams need QB help, as Case Keenum is a stop-gap measure at best and Nick Foles (more on him below) was a disaster. However, it's unclear if the Rams want RGIII or if they'll be able to land him.