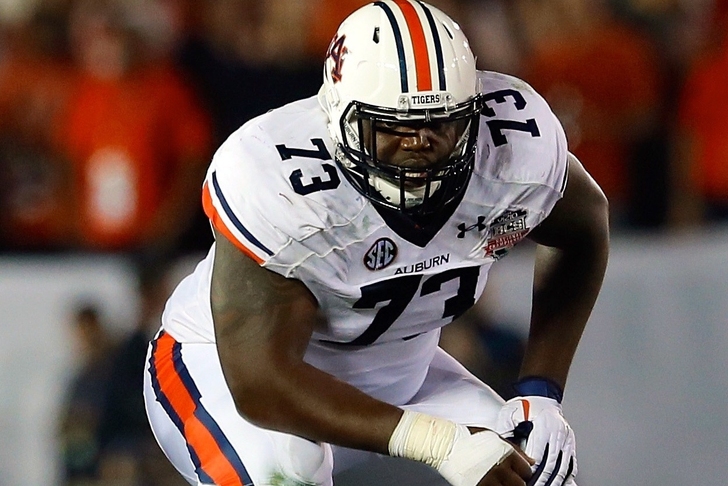 Follow Chat Sports
(On how it feels to be a Ram)

“It feels great. First off, I would like to thank the Rams Nation for giving me a chance. (Owner) Mr. (Stan) Kroenke, (Head) Coach (Jeff) Fisher, (GM) Les Snead, (Offensive Line) Coach Paul Boudreau, just everybody in general. I’m just happy they believe in me and gave me this opportunity.”

(On if he expects to hear from QB Sam Bradford soon)

“That’s unbelievable. Just to share that with my family and those who gave me the opportunity and just show my emotion that’s a wonderful feeling.”

(On if the Rams gave him an idea of where he is going to line up)
“No sir, they haven’t. Whatever they ask of me, I’m willing to just step in and help as best as I can.”
(On how he feels about playing guard)

“I got a phone call this morning and I kind of had a feeling, but it was just so unbelievable I couldn’t believe it. I didn’t want to get any high expectations or get my hopes up and something go wrong. So I just waited it out and it made things a lot better just to get that pressure off of me.”

(On if the call this morning was from the Rams)

“Yes sir. It wasn’t a specific coach they were just confirming my number.”

“It means a lot. Everybody doesn’t get this opportunity and me personally, I plan on making the best out of it and just live up to all the hype and whatever they have in store for me. I’m just looking forward to a great career.”

(On his last season at Auburn and being drafted)

“We worked hard last season at Auburn and we accomplished a lot of things, but I didn’t know exactly where I would end up at. I just knew if I worked hard I would put myself in a great position to be drafted high.”

(On working out for the Rams before the draft)

“I had a great vibe. (Rams Offensive Line) Coach (Paul) Boudreau was so fired up just to work with me and I could tell that he’s going to be a great coach. After I finished the workout he was like, ‘Okay, it’s time for the board. Just be yourself. You’ve got eyes on you, so just make the best out of it.’ I took that advice. I knew they were very interested and a lot of people were projecting me to go there, but I just wanted to wait it out just to make it seem more real because I didn’t want to think I was there before it actually happened.”

(On improving his game)

“There’s a few things I need to work on. I look forward to working on that, taking it from the coaches and learning from other players.”

(On being able to provide for his family)

“That’s a great feeling and a blessing in itself. God has given me this opportunity to do those things and I plan on making my mom happy – happier than she is now.”

“That’s a great feeling and a blessing in itself. God has given me this opportunity to do those things and I plan on making my mom happy – happier than she is now.”

(On how much he knows about the city of St. Louis and the Rams’ roster since he got the feeling he’d be drafted by the Rams)

“I don’t know much about it, but from my visits it seems like a great place to be. I have a few former players that I played with at Auburn that are a part of the Rams also.”
(On how much fun it was run blocking against the University of Missouri in the SEC Championship game last year)
“That was real fun. Later in the year, the season just got better and better, but playing against Missouri, especially in the SEC Championship, they had a lot of great players. We knew that it wasn’t going to be easy, but we went into it and just for me to…that was real fun.”
(On if crushing people is the most fun part of the game for him)
“The most important thing when I’m on the field is just to have fun, so if you think crushing people…that’s a good way to explain it or how to describe it.”
(On what he thinks when he hears that he’s being compared to former Rams T Orlando Pace)
“Orlando Pace was a good player and just for them to say that about me, that’s a great accomplishment – just to earn those rights that I could be compared to someone like him.”
(On how he’s celebrating tonight)
“Just spending as much time as I can with my family before I have to head out to St. Louis.”
Back to the Los Angeles Rams Newsfeed
0 shares Share on FB Share on Twitter