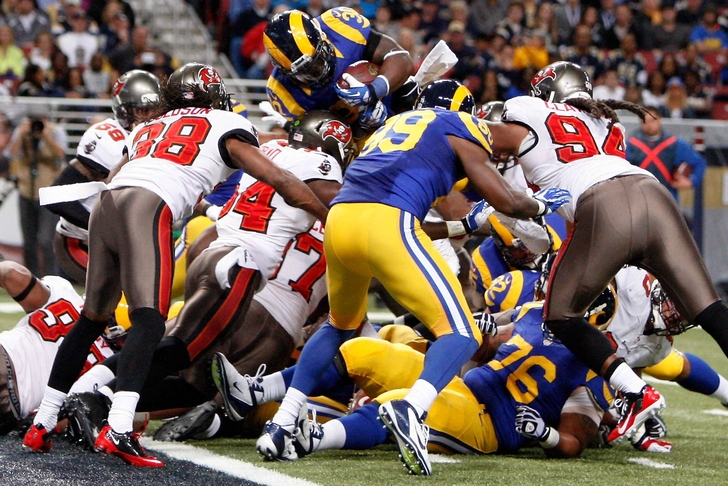 The St. Louis Rams head into Tampa Bay looking to secure a win after a brutal week one showing.

The Bucs got on the board first with a Josh McCown rushing touchdown. That was the highlight of a relatively quiet first half for McCown and the Tampa offense, as he threw for just 85 yards on 10 attempts along with an interception.

The loss of Doug Martin may have something to do with the sluggish start. He is being held out with a shoulder injury, giving Bobby Rainey the start.

Third-string quarterback Austin Davis led a scoring drive to start the game, as Zac Stacy punched it in from two yards out.

Making the start a week after taking over for Shaun Hill, Davis has been efficient completing six of eight passes for 52 yards.

St. Louis has tried to get Tavon Austin more involved, giving him two carries for 21 yards, but he left with a knee injury in the second quarter.

The game was delayed nearly an hour due to lightning in the area.

Stat to keep an eye on: The Rams and Bucs offenses have combined for 262 total yards in the first half. Both offenses are facing a number of injuries, so the low output is not so surprising.