49ers vs. Rams: 3 Things We Learned From Both Teams 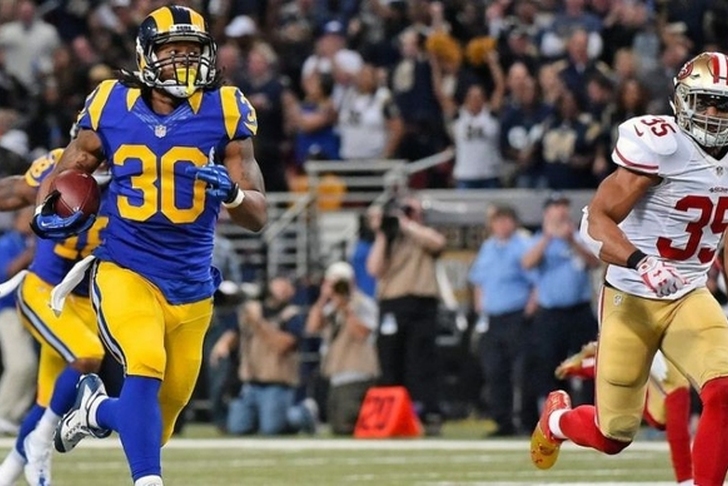 The St. Louis Rams thumped the San Francisco 49ers on Sunday, dominating their NFC West rivals in every facet of the game en route to a 27-6 home win. Here's 3 things we learned from both teams.

The 49ers' offense had yet another ugly performance on Sunday, following up last weeks' sub-150 yardage output with 189 yards of total offense on Sunday. Nothing clicked. Nothing at all.

Reggie Bush may be out for the season with a torn ACL. Carlos Hyde is already limited with a stress fracture in his foot. The 49ers may need to get creative to find a featured back, especially after Kendall Gaskins and Mike Davis combined for 10 yards on 15 carries -- averaging a putrid 0.66 yards per carry.

You can't really fault the defense in this one. They basically got zero rest, which is a killer when you're facing any team, let alone one with the offensive weapons the Rams have.

Todd Gurley has found his stride as a star leading man in the backfield. Gurley gashed the 49ers for 133 rushing yards and a TD, marking his fourth straight game with 100 yards or more.

Tavon Austin was just as impressive for St. Louis, burning the Niner defense on a 66-yard TD reception along with making up for a fumble on a two-yard rushing score. Gurley and Austin may be the most underrated 1-2 skill-position punch in the NFL.

All of a sudden, next Sunday's game at the Vikings has become a must-watch game when it comes to NFC Playoff positioning. A win there and St. Louis can take over the six seed with a tiebreaker over Minnesota (5-2).