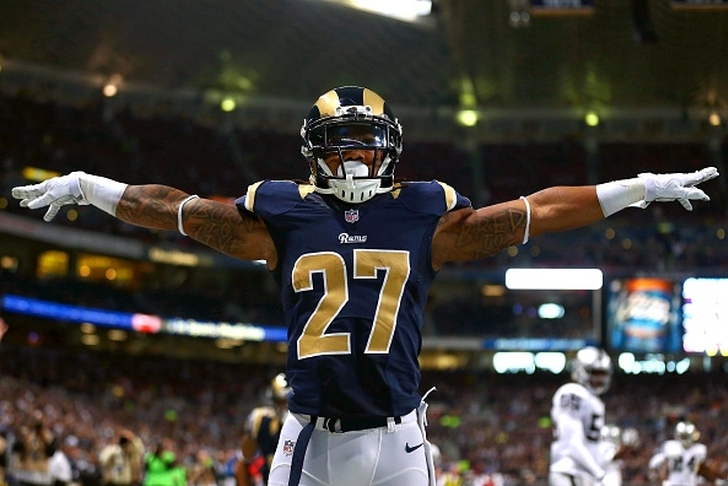 The St. Louis Rams went through a big change in the offseason. That change came by way of a new starting quarterback with Nick Foles coming to the Rams who sent Sam Bradford to the Eagles. The Rams tried and tried and tried again to give Bradford all the chances he needed to prove himself. However,  injuries, inconistent play and average receivers just never let him reach what they were looking for.

Foles comes in as the unquestioned starter but after that the offensive depth chart gets a little crowded.

Foles only played in eight games in 2014 before suffering a collarbone injury. He was averaging his best yards per game average before his injury at 270 yards. Unfortunately it doesn't really mean anything in fantasy unless you can consistently get to 300 yards. Foles certainly steps into a much less effective offense in St. Louis than what he had in Philadelphia. The Rams young, inconsistent wide receiver group could put it together which could allow the argument that Foles has a shot to be a fantasy relevant quarterback?

Let me also remind you that this guy is tied for the most touchdowns thrown in one game with 7.

Tre Mason opened some eyes in 2014 after starting the season as a healthy scratch who needed to learn how to pass block. All he did was turn into a reliable running back down the stretch and claw his way up the depth chart. He had double-digit carries in ten of the twelve games he played in and finished averaging 4.3 yards per carry with four touchdowns. Mason should see plenty of playing time this year but the drafting of Todd Gurley has this backfield looking like a committee once again.

Todd Gurley was long thought as one of the top running backs in college football. He averaged 7.4 yards per carry last season before suffering an ACL injury, which he had surgery for quickly after. Gurley had his last two seasons shortened by injuries but the Rams saw enough in him while he was on the field to spend a high draft pick on him. He is setting training camp as a realistic return date but you have to expect the Rams to play it safe with Gurley at first as long as the more-than-capable Tre Mason is healthy.

Didn't I say that it gets a little crowded? Brian Quick is still recovering from a shoulder surgery he had last October but has been progressing nicely. He expects to participate in some of training camp and should open the season as the Rams WR1 who looks to be a worthy late round pick. Kenny Britt pretty much is what he is at this point in his career. He has never reached 50 receptions or 800 yards in a season but can be a viable weekly flier in the right matchup. Tavon Austin has been nothing short of a disappointment after being the No. 8 overall draft pick in 2013. The Rams are trying to hype him up yet again but he isn't a guy worth taking a chance on in a fantasy draft. Stedman Bailey has more of a chance to become fantasy relevant than his college teammate Austin but it would take a lot for that to happen. He is a guy to keep an eye on as a waiver pick up if either of the top two receivers get injured.

Yet another underachieving member of the Rams passing corps. At 6'5" 254 lbs. and good speed you expect Cook to be a nightmare mismatch. Drops and inconsistent effort have plagued Cook thus far in his career along with a complete disappearance in the red zone. Cook leaves so much to be desired but if you do like drafting two tight-ends, you can do much worse than a late round flier on Cook.