True Or False: Byron Scott Will Be The Lakers' Coach Next Season 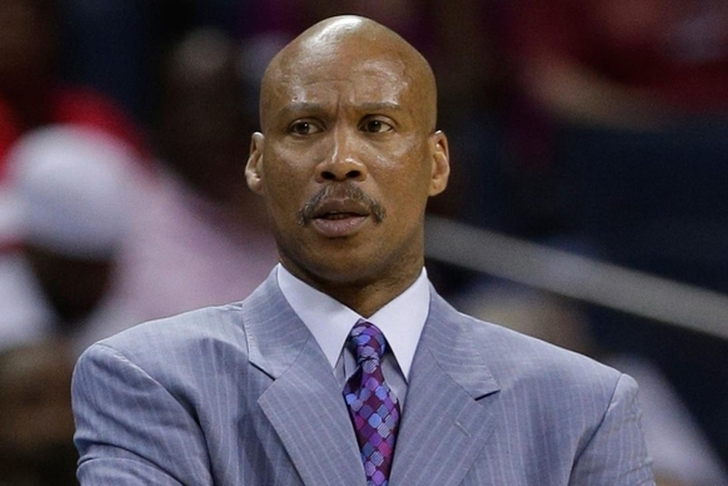 The Los Angeles Lakers' victory over the Washington Wizards on Wednesday night snapped a seven-game losing streak, but the team is still 3-15 and struggling in nearly every facet of the game. Will the Lakers give head coach Byron Scott one more chance to get things right if the 2015-16 season continues to spiral down the tubes? Let's weigh both sides of the argument.

The Case For:
According to Sam Amick of USA Today Sports, Scott is currently viewed as an "innocent bystander" while the Kobe Bryant farewell tour goes on. The group of talent that the front office assembled isn't strong enough to bear the weight of Kobe's current volume shooting woes, and the team's young base still needs seasoning -- especially with the fact that Julius Randle is basically playing his rookie season after a season-ending injury to start 2014-15.

Scott's contract is guaranteed through next year, so it makes sense that the Lakers would give Scott one shot in the post-Kobe era to help build a lasting playoff contender. We're not saying that he wouldn't be fired midseason in 2016-17 if things don't pan out, but at least they'd be able to get part of their guaranteed money back. Plus, Scott is still a serviceable coach who has a great track record of working with star guards. The team is fully invested in D'Angelo Russell, so keeping Scott around to aid in his development seems logical.

The Case Against:
Los Angeles is 12 games under .500 through 18 games. They've lost seven of eight and eleven of thirteen. The defense is an absolute mess and the offense falls back into ineffective Iso mode way too much. No top-market head coach is ever safe with such an awful record to open a season, and that's even more true when it comes to the Lakers job.

Jim Buss' days as the guy calling the shots are numbered if he can't pull off a miracle in the next year or so. Scott doesn't appear to be a miracle worker, even if he hasn't been handed the best roster to work with. The fact remains that the Lakers are an absolute mess right now, and Byron Scott won't ever be safe with the team wallowing in sub-mediocrity.

Verdict: True
This season has been such a debacle that Scott is starting to garner sympathy from some of his detractors in the Lakers fan base. If the Lakers lose 65-70 games, Scott's job will not exactly be safe. But, he's got enough respect from the higher-ups and enough of a track record to buy himself at least the start of 2015-16. The Kobe conundrum isn't of his doing. That should be enough to give him a mulligan for this year.