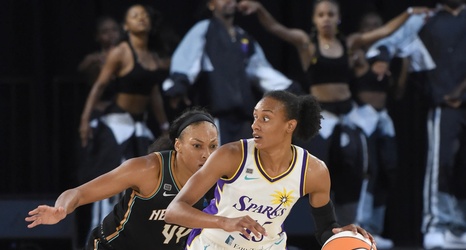 The Los Angeles Sparks paid homage to 25 WNBA seasons on Sunday in a game against the New York Liberty, a rematch of the league’s inaugural game on June 21, 1997.

But just as they did in that first game, the Sparks fell short, losing 76-73.

L.A. was doomed by a slow start on offense, as they fell behind by 14 points and trailed 44-36 at halftime. They erased the deficit in the second half, but didn’t have the firepower to come out on top.

Coach Derek Fisher made a sizable halftime move, injecting Karlie Samuelson — who didn’t play in the first half — into the starting lineup after Bria Holmes suffered a minor injury.