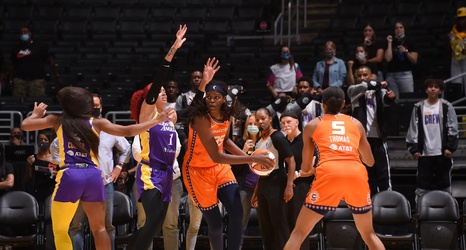 In the eternal rest vs. rust debate, score one for rust.

The Sparks, fresh off a seven-day break since their last game, looked completely out of sorts to start their contest against the league-leading Connecticut Sun. Need a win to continue to control its playoff destiny, L.A. instead conceded the first 17 points of the game, a hole that proved insurmountable in the team’s 75-57 loss, as the team never got within single digits again.

Nneka Ogwumike and Nia Coffey tied for the team lead with 12 points apiece. The Sparks have now lost six in a row and are one game back of the New York Liberty for the eighth seed, and their 18-game winning streak at Staples Center dating back to 2019 has come to an end.