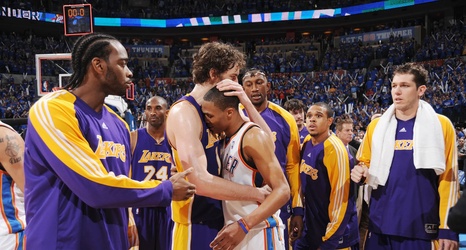 When Russell Westbrook was growing up in Los Angeles, he would try to watch the Lakers whenever he had the chance. Because his family didn’t have cable, however, he only got the opportunity to see those Kobe Bryant and Shaquille O’Neal-led teams when they were on the road, because KCAL 9 had the rights to all the team’s away games (real ones remember). But despite those constant chances to see maybe the best Lakers duo ever, 41-ish nights a year, Westbrook said there was another player whose game he gravitated to first: Pau Gasol.

“Very few people know this, but Pau was actually my favorite player growing up.