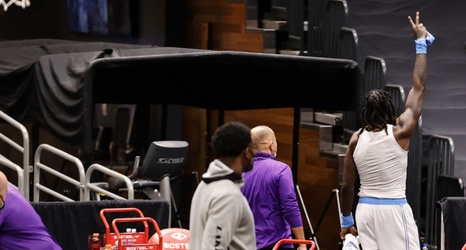 TAMPA, FLORIDA - APRIL 06: Montrezl Harrell #15 of the Los Angeles Lakers reacts after being ejected from the game during the first quarter against the Toronto Raptors at Amalie Arena on April 06, 2021 in Tampa, Florida.NOTE TO USER: User expressly acknowledges and agrees that, by downloading and or using this photograph, User is consenting to the terms and conditions of the Getty Images License Agreement. (Photo by Douglas P. DeFelice/Getty Images)

The Los Angeles Lakers defeated the Toronto Raptors on Tuesday but that was far from being the biggest story of the game.