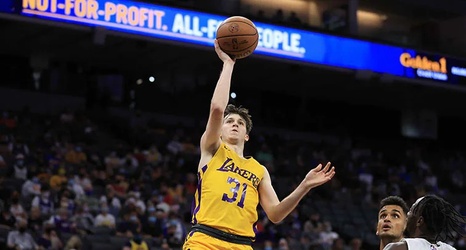 Amidst the free agency flurry going on with the senior squad, a group of young NBA hopefuls on the Lakers Summer League squad tipped off their exhibition schedule with an 80-78 loss to Miami in Sacramento’s California Classic.

The Lakers played hard in their first competitive action as a group, which made up for the expected lack of cohesion, and they maintained a lead for most of the game before Miami battled back and emerged with an 80-78 win.

Within hours of announcing their new two-way contracts between the Lakers and their G-League affiliate, the South Bay Lakers, Austin Reaves and Joel Ayayi made their debuts in the starting lineup, and both played well against the Heat.