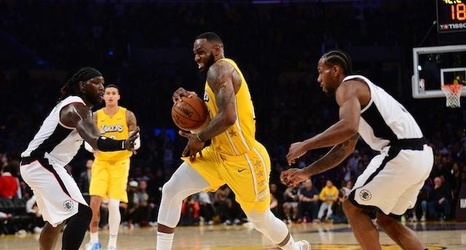 After playing the first 29 games of the 2019-20 NBA season, LeBron James did not play against the Denver Nuggets due to a thoracic muscle strain and ‘nagging’ groin issue.

As the 34-year-old will play as long as he is healthy in his 17th season amid the load management debates, he returned against the Los Angeles Clippers on Christmas.

However, early in the first quarter, James tried to take a charge on Patrick Beverley but got kneed in the groin area.

While James continued to play, he admitted the collision impacted him, according to Dave McMenamin of ESPN:

“I felt healthy going into the game,” James said after finishing with 23 points on 9-for-24 shooting, with 10 assists and 9 rebounds.